Crossing over a bridge in Isso, a small fishing village on the north side of Yakushima, I turn onto a narrow street alongside a river and come upon a three-story concrete structure. In lovely, hand-brushed letters I find a sign inscribed with “Kiyokonnegai” in Japanese. 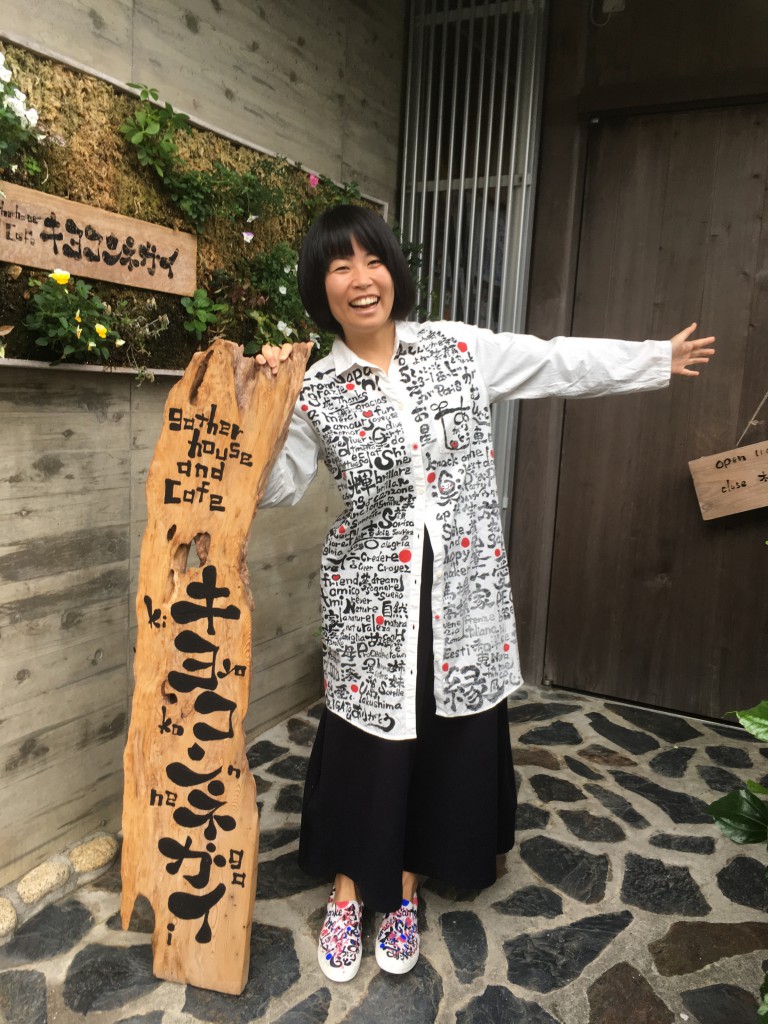 Ms. Kimika Baba, the café’s owner, welcomes me with a bright smile that feels like sunshine. Kimika-san grew up in Isso, living here through high school, but left the island – and the prefecture – for college and then to find a job.

“Kiyokonnegai” means “Old Sister Kiyoko’s House” in Isso dialect. It used to be Kimika’s grandmother Kiyoko’s house. Kimika tells me, “I really love Isso” so it is no surprise that many of the items on her menu make use of dried mackerel, the local specialty. 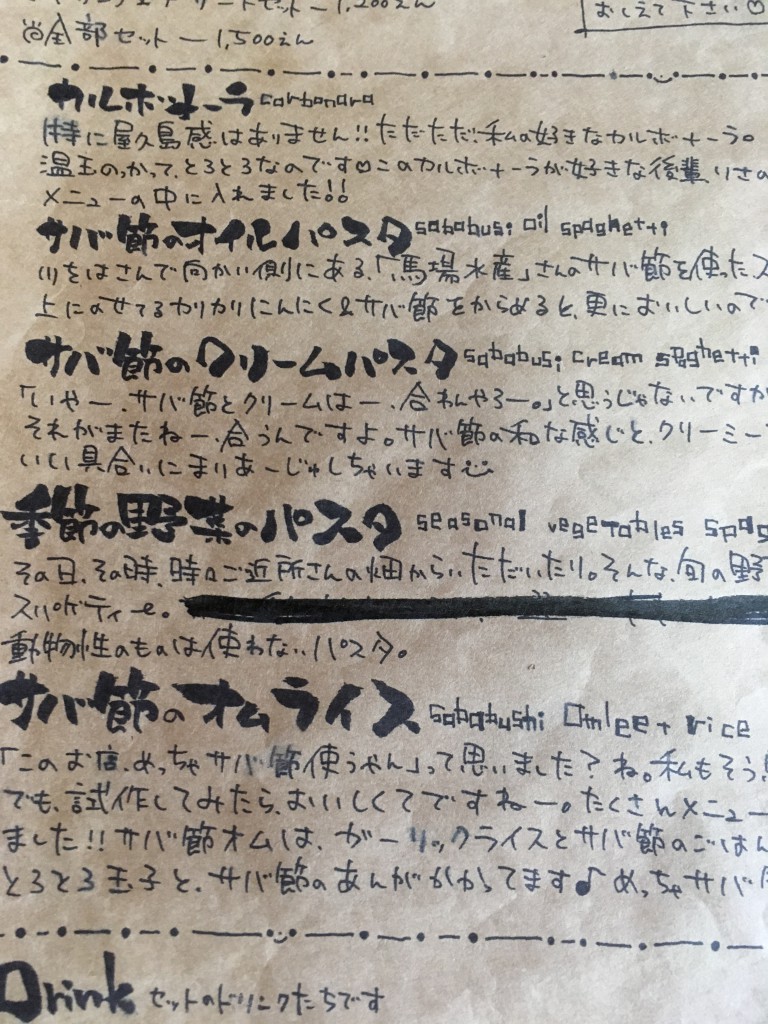 The descriptions on the menu are interesting.

Kimika-san is also a calligraphy artist and exhibits her work in Japan and overseas. She began studying calligraphy in preschool but got her start as a performer when she and a friend held a performance on a city street. Apparently, passersby were quite taken with, and happy to receive, her work.

“When I saw how happy people were, I immediately knew that this is what I wanted to do!”

After quitting her corporate job, Kimika-san toured Japan on a 50cc scooter, managed a guest house in Okayama prefecture, and traveled to other countries in Asia and Europe. Everywhere she went, she continued to hold calligraphy performances. When she participated in a calligraphy event at a large convention center in Tokyo, Kimika-san felt the joy of writing with a brush once again. “I felt the strong desire to make calligraphy my life work,” she told me. Through calligraphy, she met and became connected to a variety of people, and was invited to display her work at the Kiyomizu Temple, in Kyoto, and at group exhibitions overseas.

During this time, Kimika-san was also trying to decide whether or not to return to Yakushima, to her family home in Isso. She finally did return to the island where she runs a café, though she also continues to travel widely as a calligraphy artist. 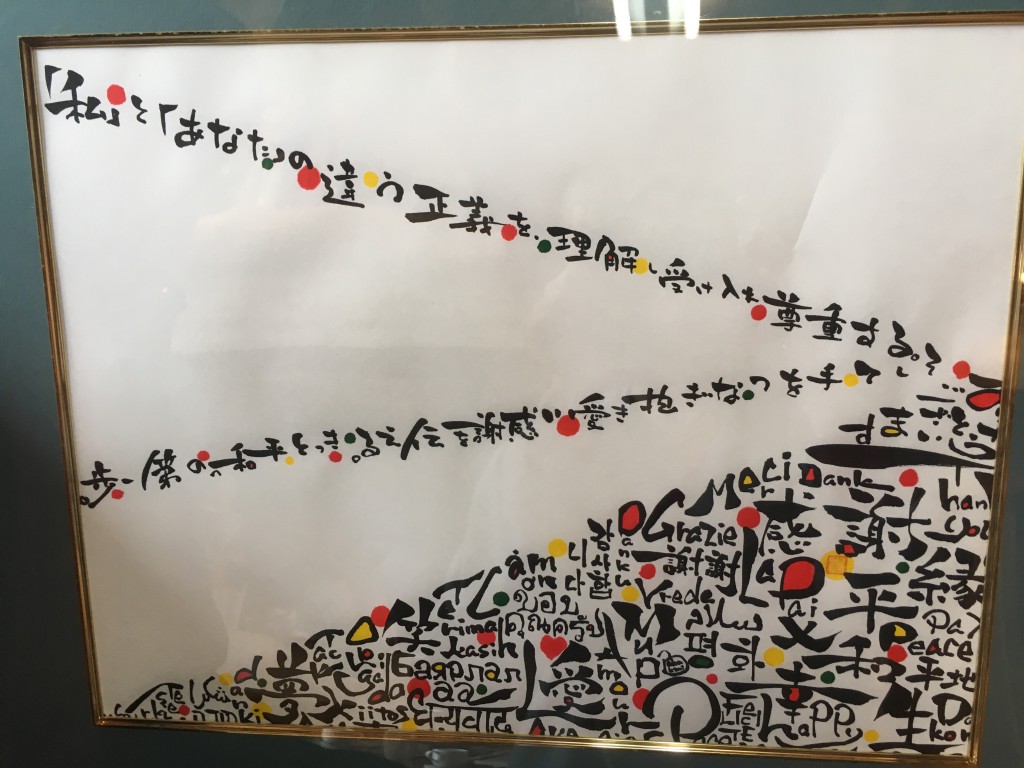 Joining “correct” and “correct” at the World Peace Art Exhibition in Nice, France. 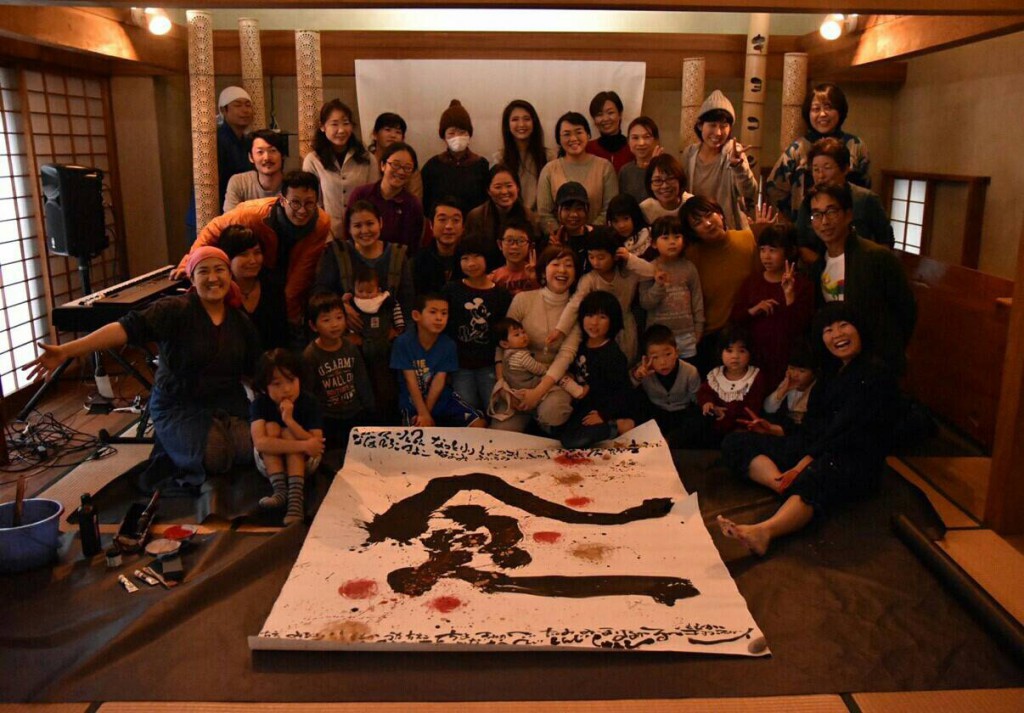 An event in Isso featuring music, cheese, and calligraphy.

“I was raised by the residents of Isso. I hope my café will be a place to connect the shy and warm people of this village with tourists and migrants visiting from the outside world. I want visitors to get to know the people of Isso whom I love, and I want the local children, who know only this island, to know they have the potential to do anything.” 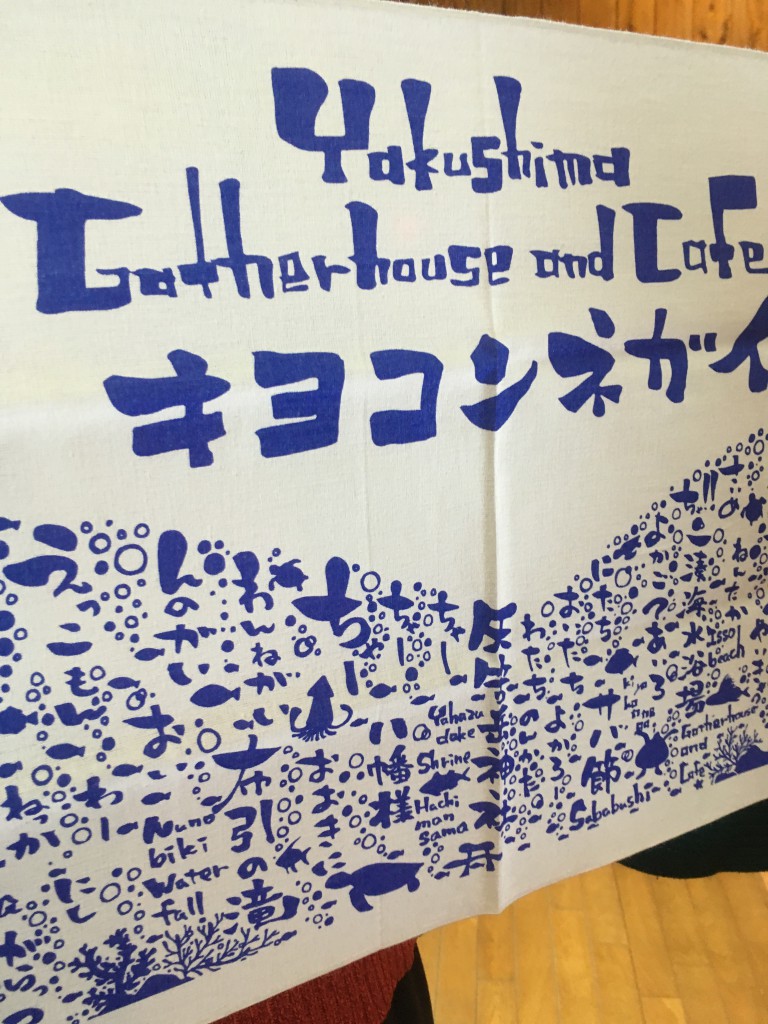 A cotton towel with writing in the local Isso dialect!

Kimika-san found her potential when she went out into the world as a calligraphy artist. And now the world also comes to her. Feeling the brightness of Isso’s native sun, someone is probably stopping in at the Kiyokonnegai Café again today.