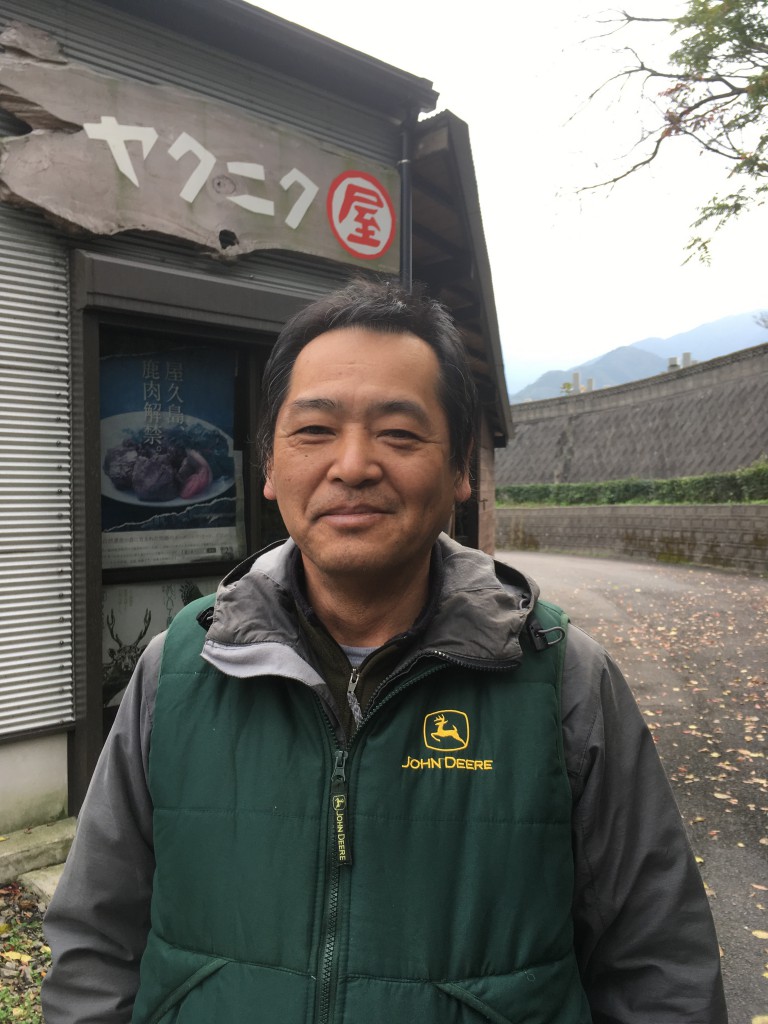 “Yakushima’s venison is delicious because the deer eat such an abundance of plants in the island’s forests.” That is what Mr. Ichiro Makise tells me in his capacity as the owner of “Yakunikuya,” a venison shop in the town of Miyanoura.

The deer here on Yakushima are called “Yakushika” (literally “Yaku deer”). They grow up feeding on the island’s plush forests and become one of the island’s food resources as well, served in local restaurants and lodgings.

Yakushika is a subspecies often found on remote islands and in isolated places. Yakushika are smaller than Japanese mainland deer and because they spend their lives on the island’s steep and varied mountain terrain, their red meat is lean.

Because Yakushika were so numerous that they were creating an imbalance in the island’s ecosystem and were raising havoc on the farmers’ crops, nearly 5000 deer were being killed annually and buried in the forest. As a local hunter, Makise-san felt that “the Yakushika are a part of the local nature” and wondered, “Is there a way we can make use of this delicious venison?” With this in mind he opened “Yakunikuya” in 2015.

Makise-san’s parents and his grandparents before them were butchers. When he was growing up his grandmother used to say, “In the old days, we used to wrap venison in a leaf and take it around to the homes of wealthy customers. It cost three times as much as pork.”

It is vitally important to process venison as quickly as possible. When you hunt deer, you want to get them down out of the mountains right away and put them in a place with a controlled temperature. Then they must be skinned and gutted, and hung in a refrigerator for 3-5 days to drain any blood and other fluids before cutting the meat into smaller pieces. During this process one must check repeatedly for sickness, maintain hygiene, and confirm that there is no metal present.

It is a labor-intensive and costly process with many hurdles to cross. It is harder to turn venison into a local resource than Makise-san had imagined. “Hunting the deer, preparing the venison and selling it, I’ve come to understand what my grandmother was talking about.”

Yakunikuya is making effective use of the deer they hunt, developing products such as venison jerky, venison ramen, deer pelt products, and fishing lure rigs. “Treating them as gifts from Yakushima’s forests, I would like to make careful use of the deer’s lives. I think this is a part of the island’s culture.” Makise-san strives to maintain a balance both as a hunter in the forest and on the island as a whole.